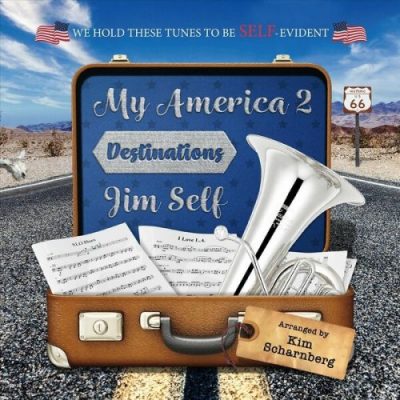 Jim Self unabashedly loves America and decided it was time to do a follow-up to the original My America – released some twenty years ago. For that album, he used songs that were associated with Americana, like ‘I’ve Been Workin’ on the Railroad’ and ‘When Johnny Comes Marchin’ Home Again’. For volume two, he chose songs with city, state, and area titles that were hit tunes in their day. He once again gave free rein to arranger Kim Scharnberg to work his magic and create unusual and stylish versions that give ample space for the soloists to ply their jazz improvisations. The songs feature the musicians in different configurations, creating interesting and changing dynamics when you listen to the album from start to finish.

Self opens the album with ‘Chicago’, a city whose jazz scene was an early influence on him. The song was written as an homage to the partying and excess of the roaring 20s, and Scharnberg gives the tune a fun, Dixieland arrangement that is a perfect fit. Self opens Jimmy Webb’s ‘By the Time I Get to Phoenix’ with his warm, mellow tuba playing the melody, which is followed by the rich, interweaving textures performed by Stout and Cunliffe. ‘Kansas City’ is a medley of two songs with same name, one by Mike Stoller and the other by Richard Rodgers. The arrangement moves between swing and shuffle grooves, featuring solos by Booth on trombone, Chiodini on guitar, Self on tuba, Feather on alto sax, and rock and roller Steve Fister on guitar.

‘New York State of Mind’ is a modern pop classic with Cunliffe playing the melodica and Self playing the fluba, an instrument that he created, which is a combination of a flugelhorn and tuba. ‘King of Route 66’ is a medley of two great pop tunes. Self, Chiodini, Cunliffe, and Wild really come out swinging, especially on the duet with bass and tuba. ‘Blue Bayou Bossa’ is a lovely mashup. It features solos by Peterson and Stout.

Self has played on several Randy Newman albums and on many of his film scores. Los Angeles has been Self’s home for 48 years and he loved the idea of including Newman’s iconic song ‘I Love L.A.’ Self plays his cimbassos in F and BBb, and Booth adds euphonium parts, while Kilgore adds another texture on the marimba. ‘Back Home Again in Indiana’ is the theme song of Indiana University of Pennsylvania, where Self attended. For this version, Scharnberg created an orchestrated version of Dave Brubeck’s recorded arrangement.

If you are doing a song with American themes, you should include at least one boogie-woogie number, which Self and Scharnberg do on ‘Chattanooga Choo Choo’. Of course, one of the most iconic songs in the American songbook is ‘I Left My Heart in San Francisco’. It features a beautiful rendition by Booth on trumpet and an unusual accompaniment of English horn, tuba, and piano. Early in his career, Self was member of the U.S. Army Band in Washington, DC, and wanted to include a song about the city. Scharnberg deconstructs John Philip Sousa’s composition, ‘Washington’, and turns it into a very hip, postmodern version called ‘Washington Postmoder’. Self and Cunliffe perform a soulful, sensitive version of ‘Georgia on My Mind’ on just tuba and piano.

Self always includes at least one song he has composed on his albums, and here he includes his composition ‘S.L.O. Blue’, a piece he wrote about the town of San Luis Obispo, where he has had a vacation home for thirteen years. All the descriptions above have been taken from the press release I received withy my copy of the album and ordinarily I would not just cut and paste but on this occasion, the writing is, in my opinion, accurate and devoid of hyperbole. This is a fun varied release featuring well-known tunes with great arrangements. I very much enjoyed hearing the tubas and euphonium, both of which are played with skill and fit so well with the mood and enjoyment of the album. There are moments of exuberance, joy, fun, and sensitivity on My America 2 – Destinations and the musicians, led by Jim Self, do justice to the arrangements of Kim Scharnberg and the music that pays tribute to America.