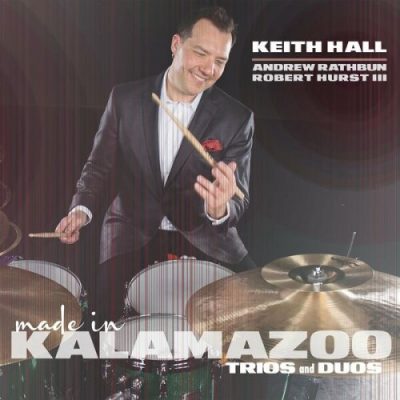 Drummer and composer Keith Hall spent nine years on the New York scene and returned to the Midwest where he has been deeply immersed in the Kalamazoo community for some 20 years. After playing with the likes of Wycliffe Gordon, Sir Roland Hanna, Michael Phillip Mossman, New York Voices, Janis Siegel, Luciana Souza, Terrell Stafford and Steve Wilson, Hall now makes his long-awaited debut as a leader. “Made in Kalamazoo (Trios and Duos)” is a free-wheeling set of high-energy music that is a love letter of sorts to a place Hall appreciates for its vibrant arts community, dynamic industries and vital personal connections. The album documents the drummer’s most accomplished and compelling playing and writing to date.

Roughly 100 miles east of Lake Michigan (across the lake from Chicago), Kalamazoo provided the inspiration for this invigorating summit between Hall and two of the finest collaborators he could ask for: Andrew Rathbun, a fellow jazz studies professor at Western Michigan University and transplanted Kalamazooan himself, on saxophones, bass clarinet and effects; and eminent Detroit-born bassist Robert Hurst III, currently teaching at the University of Michigan.

Made in Kalamazoo finds Hall in a few different modalities with the players involved. There are three solo drum features — placed at beginning, middle and end — in which Hall pays homage to the towering role models Billy Hart, Elvin Jones and Max Roach. There are seven tracks with the full trio, including three compelling Hall originals (“Coming of Age,” “Creative Force,” “Well of Hope”) and four tunes that the leader co-composed with Rathbun (“Douglass King Obama,” “Kzoo Brew,” “The Promise,” “Boiling Pot”). And there are 10 spontaneously composed duo tracks for drums and reeds, giving Rathbun creative space to “plug in” at times with signal processing, dirtying up the sound and leading the duo onto new and shifting terrain.