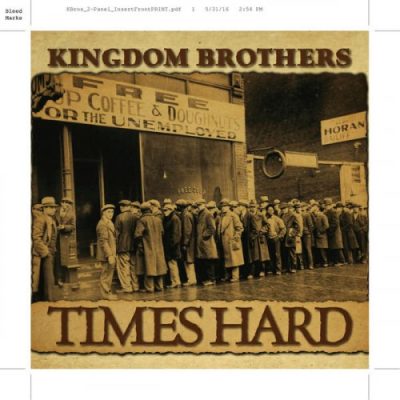 Kingdom Brothers, the red-hot electric blues band from St. Louis, MO credit their notable sound to the timeless influences of the great blues icons – Albert King, Muddy Waters, Otis Rush, Eric Clapton – to name a few, and the powerful spirit of gospel groups like The Blind Boys of Alabama and the Dixie Hummingbirds.

With the soulful vocal delivery of songwriter Chris Shepherd, a solid rhythm section, and some tastefully smokin’ guitar and keyboard magic, Kingdom Brothers create a memorable effect you’ll want to experience over and over again. Toss in that Ron Roskowske bottleneck slide, crank it to eleven, and you’ll be looking for tickets to their next show.

When blues veteran and Kingdom Brothers’ founder Bob Walther formed the group in 2005, he reached out to established area musicians who wanted to do something really different on the St. Louis music scene.

“What you will not hear in our set list are numbers like ‘Sweet Home Chicago’ and ‘Rock Me Baby’,” says Walther. “Both are fine songs but can be heard seven nights a week in every blues club in the area. Instead, we cover our favorite cuts by the blues greats.” Also featured in Kingdom Brothers’ set list are traditional gospel/blues numbers and Kingdom Brothers’ original songs, including tracks from the band’s newest album Times Hard, and their 2008 CD release Shine a Light. Emphasizing a more hopeful message, Kingdom Brothers avoid tunes with offensive lyrics that romanticize decadence and defeat. The band demonstrates that, as the title of Shepherd’s latest offering states, “The Blues Don’t Have to Be Sad.”

This fresh approach was a bit risky but has paid huge dividends for the band, attracting a sizeable and devoted following in the St. Louis market. Kingdom Brothers were selected to represent the St. Louis Blues Society in the 2015 International Blues Challenge in Memphis, appearing in the semi-finals. The band continues to win over fans at each performance.

Along with Walther on bass, Shepherd on lead vocal and rhythm guitar, and Roskowske on lead and slide guitar, the current Kingdom Brothers lineup includes drummer Joe Warmbrodt, and Stan Gill on keyboards.

The recently released Times Hard, featuring 12 all-new original Kingdom Brothers tunes, is already beginning to attract the attention of blues enthusiasts and DJs around the world with airplay in Canada, England and Australia, while Shine a Light, featuring the vocal performance of veteran R&B singer Tom Wilson on the title track, and Shepherd’s break-out hit “Testify”, has received FM radio play on five continents and has garnered excellent reviews here in the U.S. and in Europe. Kingdom Brothers continue to draw crowds throughout the Midwest as they expand their listener base beyond just hardcore blues fans.