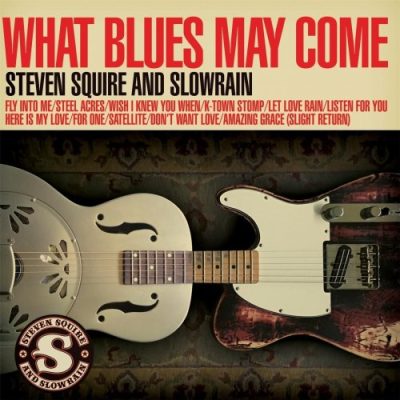 Steven Squire swears he was staring out a window from the back of his mom’s car in Los Angeles, six years old, nothing happening at all, when from the rock ‘n roll radio station came some fine, fine music in the form of the Beach Boys’ “Good Vibrations”. He couldn’t believe what he heard! It blew the dust off of everything and he had to move. His life as he knew it was saved by rock ‘n roll. And it was alright! Later he heard the Velvet Underground’s “Rock ‘n Roll” telling the same tale and was thrilled there was someone else out there too. “I love Lou Reed’s narrative of the song with such matter of fact conviction. It really did happen that way for me too and I had felt isolated with these revelations before hearing his tune.” Steven then dove into his sister’s record collection and claimed one single to be his own. He wore the grooves out of John Lennon’s “Instant Karma” all because of the sound. “About this time I was also watching Johnny Cash’s show on TV without blinking. I remember the voices of my family milling behind me mumbling, ‘What’s with the boy?’” Soon after, the first album he owned was the Rolling Stone’s “It’s Only Rock ‘n Roll”. The revival was on.

Steven began writing his own songs as a teenager largely because he was a self-taught guitarist with little experience. He played his own mutated versions of some old blues his musical mentors played, but was either too impatient or unable to learn other songs. “I would never be hired into a cover band because I can’t play other artists songs well enough. I admire those who can pick off licks and chords with ease, but that’s not me. I always had to create something on my own to play so I could stay close to the feeling rock ‘n roll music gave me. I guess I still play a form of mutated blues.”

The first gig came about when Steven and his high school friend, Nick, were strumming basic three chord Neil Young, Dylan and Dead songs when Nick’s sister came home from her waitress job and quipped, “You guys sound better than the hack at our bar”. Nick joked back with “Get us a gig then”. So, she did. On the busy Labor Day weekend. Who was going to sing? “Even though Nick was an accomplished bass player and was getting pretty good on the guitar, he flatly refused to do any singing. So this is when I began singing with the guitar in public.”
Steven’s guitar style was shaped early from hearing the full scale rock ‘n roll band sound in his head while learning to play guitar on his acoustic. Wanting to fill in all the spaces with the rhythm section of the songs, he subconsciously developed a percussive approach. “The back beat had to be there to rock. Even if that meant I was probably always over-playing.” The electric guitar thankfully came. Then the amps. And the kids. He continued to write songs along with his day job and fatherhood. He taught his kids to play the various instruments he had on hand and made up songs with them for the fun of it. “What kid doesn’t light up around musical instruments, let alone making music! They were quite adept at adding their own ideas and I know I sponged off their enthusiasm.”

His passion grew and Steven built himself a recording studio at home. With limited windows of time he built music tracks that originated from his acoustic with electric guitars, mandolin, bass, harmonica and drum machine. “Yeah, the real drums were sorely needed. Programmed drums worked well for building the tracks and keeping me honest with being relatively on time, but there is no substitute for the real thing in my mind.” When he couldn’t find an available compatible drummer, he transferred the cost of hiring someone to buying a drum set, learned to play on his own and recorded them. He rarely uses any studio effects, only the occasional wah wah pedal will make an appearance on the guitar. Steven likes to record his guitars through all-tube amps with miked cabinets and acoustics for a warm and real in-the-room feel. “Similar for me having to have real drums on all my tracks, I like to have my amps turned up when I practice or record. It’s that whole rock experience I was hit with the first time I felt it. I’m not bothered by incidental amp hums and pick noises because, I’m inspired by a live room and performing the physical act of making music, which translates to fun! I can’t apologize putting the guitar up front, this is guitar-driven music.”

Steven Squire continues to create music because the ideas are there and he has to keep alive that first immediate blow to boredom he felt so long ago. “I’m able to relive that rush of clarity every time I play or hear what I like. Only, I know now that I’m not the first and I’m not the last.”