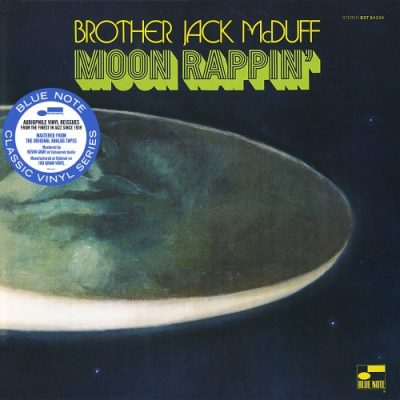 Moon Rappin’ is one of Brother Jack McDuff’s most ambitious efforts, a loose concept album that finds the organist exploring funky and spacy soundscapes. Unlike most McDuff records, there isn’t a steady groove that flows throughout the record — the album flies into atmospheric territory that isn’t strictly soul-jazz, but it’s far from free. In many ways, Moon Rappin’ is a fairly typical album of its time, boasting wah-wah guitars, flutes, spacious reverb, long bluesy vamps, orchestras, and disembodied backing vocals, but it also stands out from the pack in how it offers some excellent improvisation (including a rare piano spotlight on the title track) and unpredictable moments, like the stuttering organ and nearly free interludes on “Made in Sweden.” It’s not strictly funky — it doesn’t have the grit of early Brother Jack records, nor does it swing hard — but it proves that McDuff was as adept in adventurous territory as he was with the groove.
Review by Stephen Thomas Erlewine