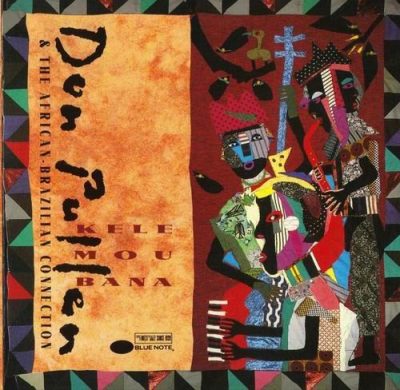 Don Pullen’s reverence for African and Brazilian music might be surprising to some fans who know his progressive jazz work as a leader, or as a sideman with Charles Mingus. While there’s always been a hard samba component or even South African vibe to his unique piano voicings, those elements come out in full force with this startlingly fresh and alive ethnic fusion, jazz-oriented music. Assembling a multicultural band of the highest order, the acoustic pianist from the Eastern seaboard of the U.S. reaches across the oceans to work with Senegalese percussionist/vocalist Mor Thiam, the Panamanian born alto saxophonist Carlos Ward, and from Sao Paulo, Brazil, the quite resourceful bassist Nilson Matta and veteran percussionist Guilherme Franco. Everything with this band clicks from the word go, as Pullen weaves his way through a panoramic world view that, in this limited CD format, seems like he’s merely scratching the surface of what this ensemble is capable of. Thiam’s influence is the most telling, as he adds chanted village griot vocals on two selections, while his African hand percussion work is second to none, primarily on the djembe drum. The indomitable spirit of this music is priceless, especially when listening to the title track, a Thiam original starting with a percussion discussion moving to Pullen’s modal spirit song piano and caravan rhythms that end with a ceremonial, tribal vocal from the author. Franco’s insistent berimbau identifies his composition “Capoeira,” enhanced by the repeat piano chords of Pullen and Ward’s happy alto. The most unique and universally attractive track is the self-explanatory “Doo-Wop Daze,” recalling old retro-soul mixed with a contrasting Latin pulse in 6/8 time. The purely pop bossa nova “Listen to the People” with vocals from the leader’s brother Keith Pullen and sister-in-law Tameka Pullen singing sister Sandra Pullen’s faith based lyrics, is an agreeably compromised family affair, but Matta’s bass on “L.V.M.” and the following “Directo Ad Assunto” is more authentic, as the group rushes through streams of flowing, crystal-clear water, while Pullen’s modal, rhythmic-based piano is happily washed downstream via a bass solo and Ward’s furious horn solo. There’s a certain reverence to this music that speaks to a higher power, yet is firmly grounded on Earth, a purely organic music that takes soulful elements from within, and grows them to vast natural proportions, enhanced by no growth hormones or chemicals. After listening to Kele Mou Bana, one feels this is not a one-shot, as if there’s much more to come, and a follow-up effort is in order.
review by Michael G. Nastos