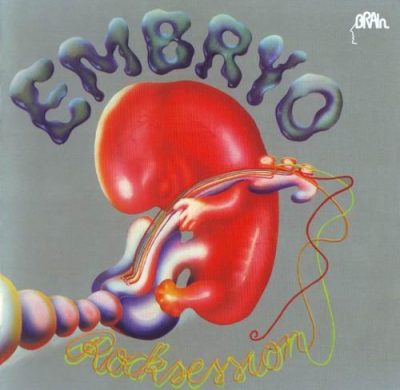 Progressive rock provides the framework but jazz-rock gives the flavor to this powerfully seductive album-length workout, four extended numbers (on which the vocals who are present are buried so far down in the mix that these are essentially instrumentals) that surge forth with saxophone solos and keyboard runs to rival the best-known English and U.S. prog rock bands — and Christian Burchard’s myriad percussion sounds (outdoing even his keyboard timbres at times) are in a class of their own. The difference between Embryo and their English-speaking rivals is that Embryo are content to take their time, even compared with acts such as King Crimson, getting where they’re going, and don’t mind going in long, extended detours into the funkier side of jazz. “Entrances” — which, despite its title, is the second track on the album — is worth the price of admission by itself for its seeming digressions, which all pull together around Jorg Evers’ amazing bass work. And the rest of the record is no letdown, even after the quarter-hour of soaring excursions on that number. It all should have been more widely heard outside of Germany and Central Europe.
by Bruce Eder