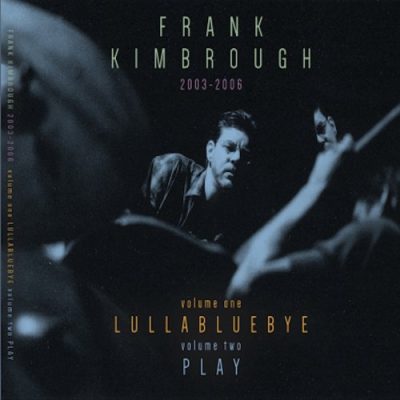 Frank Kimbrough has been a brilliant and often-overlooked pianist on the scene for more than 30 years. His brilliance is right there in the music, no great mystery. His overlooked-ness is a bit more puzzling, but also less of an issue now than it was earlier in his career.

For his 2004 album Lullabluebye, Kimbrough enlisted two fellow members of the JCC, bassist Ben Allison and drummer Matt Wilson. It’s a program of evocative originals, and to my ear a creative breakthrough for Kimbrough as an artist and bandleader. He has released several excellent albums since then, including a gem of a solo piano recital titled Air. But I picked Lullabluebye because of its pivotal quality — the way in which it encapsulates a state of elegant imperfection that Kimbrough sees as critical.

“Frank Kimbrough has been a valuable pianist based in the New York area ever since the early ’80s. On this album he is teamed with bassist Ben Allison (who along with Kimbrough co-founded the Jazz Composers Collective and the Herbie Nichols Project) and drummer Matt Wilson. They perform six of the pianist’s originals plus “You Only Live Twice” from a James Bond movie and Allison’s “Ben’s Tune.” The music is unpredictable post-bop jazz and it includes “Centering” (which is influenced a little by Thelonious Monk), a piece dedicated to Andrew Hill (“Ode”), the well-titled “Whirl,” and “Ghost Dance,” which is inspired by the unusual avant-garde music of Annette Peacock. The music on Lullabluebye often sounds simpler than it is, setting impressionistic and sometimes introspective moods and swinging in its own fashion without being overly tied to earlier jazz styles. The three musicians often play as one, although Kimbrough is clearly the leader; it is just that he seems open to the musical suggestions of Allison and Wilson. This is an excellent program of modern jazz that grows in interest with each listen due to its subtlety and quiet surprises.”
review by Scott Yanow