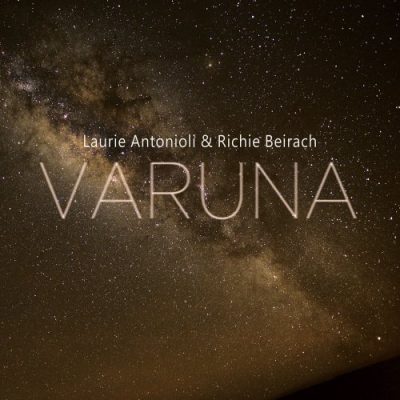 There is a tuneful Constellation in the West and her name is Laurie Antonioli. Returning to her native Bay Area in 2006 after an expatriate period in Europe where she served as professor of voice at Austria’s Kug University, she formed her “American Dreams” band recording, most recently, the well critically well-received albums, American Dreams (Intrinsic Music, 2010) and what is considered her breakout, the excellent Songs of Shadow, Songs of Light: the Music of Joni Mitchell (Origin Records, 2014)

Antonioli returns in an anticipated paring with pianist and composer Richie Beirach on the intense and introspective Varuna. Antonioli’s association with Beirach dates to the early 1990s when the two recorded(and released in 2005) The Duo Session (Nabel Records). This release demonstrated an already established report between the two artists that manifested in a mutual understanding and respect readily heard on the recording. The two picked up where they left off, in 2006, recording six pieces in Leipzig, Germany (while both were teaching there) and then in again 2012, recording seven pieces in Berkeley, CA.

After this lengthy maturation, Antonioli was ready to release these recordings, intelligently programmed as only she could do. Part of the recording focuses on the aesthetic beauty of Antonioli’s durable alto which she employs in the wordless songs like, “Varuna” and the three pieces of the “Resolution Suite.” She and Beirach reach a rarefied interface between instrument and voice and between heart and mind. They tie this foray into a nice bundle with an almost spiritual take on John Coltrane’s “Impressions.” This is where Beirach fully cuts loose and shows off his famous chops.

Antonioli uses an inspired collection of standards that perfectly meld with the originals. The two artists allow Alexander Scriabin’s “Prelude in E-flat Minor” to carefully dissolve into “My Funny Valentine.” Long relegated to the stack of standards that should no longer be covered, “Valentine” is daunting. Only the most original and creative interpretations need be tried with this piece of music. Gladly, the two transmogrify the piece into something delicate and special. They take “Valentine,” “Haunted Heart,” and “Over the Rainbow” and define the modern art song as if they breathed the same air as Schubert and Wolf.