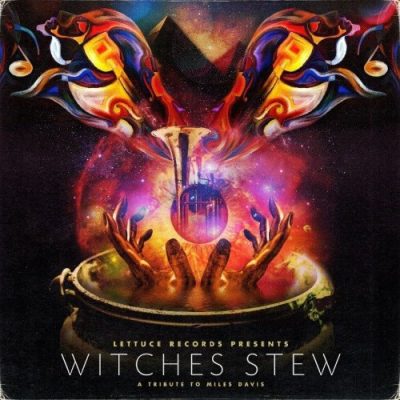 It’s a daunting task but a laudable ambition to afford direct tribute to a musician as iconic as Miles Davis and a work of his equal in stature, Bitches Brew (Columbia, 1970). But like the ensembles before them that revisited this bonafide classic, including the World Saxophone Quartet, Lettuce prove up to the task. In fact, he octet tender their homage, Witches Stew, in such a way it suggests ‘The Man with the Horn,’ were he still living, might well look the band for inspiration as he did Jimi Hendrix and Sly and the Family Stone at the time of the original recordings.

For A Tribute to Miles Davis, Lettuce have availed themselves largely but not exclusively, of the man’s groundbreaking work from 1970. Nevertheless, just as the group refuses to restrict itself unnecessarily as it continues to hone their own brand of jazz-inflected funk, the group deigns to broaden their reach beyond the album to which this title alludes, (hence the subtitle). Accordingly, the ensemble interweaves material from the the main source and its immediate predecessor in the Davis discography, In A Silent Way(Columbia, 1969) plus other selections from the legendary trumpeter/bandleader’s electric era.

Adding indispensable dynamics to this collection of seven songs, handpicked by the band and recorded at the 2016 Catskill Chill in Lakewood, PA., “Shh”/Peaceful” and “In A Silent Way/”It’s About That Time,” extend the mood set by the atmospheric invocation of the band’s muse, via Eric Bloom’s trumpet, on “Miles Chases the Voodoo Down.” Synthesizer washes flow around electric piano from keyboardists Nigel Hall and Neal Evans, while guitarist Eric Krasno (like the latter also of Soulive) and Adam Smirnoff flick notes from their instruments to add further color to the flow.

A cull from Live/Evil (Columbia, 1971), “Sivad,” offers marked contrast to the tranquility of the surrounding numbers. Drummer Adam Deitch pushes the band through a roiling set of changes, illustrating how this style resides so squarely in this band’s collective wheelhouse: it’s no surprise this number marks the point the performance assumes something of a life of it’s own. A demonstration of the band’s patience subsequently arrives in the form of the jaunty and jagged likes of “Jean Pierre,” from the comeback concert album We Want Miles (Columbia, 1982), during the course of which Ryan Zoidis exhibits an earthy imagination.

Given that Lettuce hasn’t played much of this music very often since this sole date, it remains unfortunate, albeit understandable, that the near hour-long Witches Stew will only be available in digital form (no physical configurations at least for now), thereby somewhat restricting its dissemination to the public at large. Still, the group made the effort to adorn the release with a wildly colorful ‘cover’ image, an exercise emblematic of the group’s earnest intentions in conceiving and executing the project.. And while A Tribute to Miles Davis hardly represents the cultural paradigm shift represented by the groundbreaking release, the effort allows Lettuce to do justice to their influences, while still retaining their own collective persona.