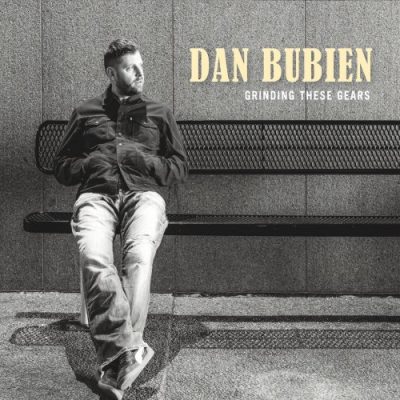 Following a debut album can take time, three years has passed since Dan Bubien’s debut Empty Roads. Choosing to self-produce again, Grinding Those Gears is a rootsy fueled album of Ten original songs. The album has an easy listening traditional feel with the tracks seamlessly flowing with changes of tempo never grinding on your ear.

Opening with Palest Rider, the wide open spaces of a cowboy painted across the opening guitar chords and relentless drumming. The music expands with key and vocals and the undercurrent of blues structure the emotional feeling runs through the vocal delivery and underpinned by the music. The closing track, The Struggle Is Real pulls the albums exploration of roots together with an industrial sound that evokes the Chain-gang blues of the past. The bass drum once again used again to powerful effect by Andy Taravella a constant tour-de-Force throughout the album.

The title track picks up the beat, with the driving force of melodic rock, the piano from Joe Munroe makes the track pop with an energy fueling the guitar to rock. The fine solo from Eddie Manion’s saxophone sets this as a track that rocks at a different level to many. Three tracks in and the Grinding Gears take us in a different direction now we have soulful Dan with a hint of blue we are in the heart of Detroit with his vocals full of yearning. The chorus picks up the mellow tones that cuddle your souls and soothes the tired spirit with Forever Yours

The album is a journey that never grinds the gears of musicality. The slide guitar used to great effect for a stripped back number Dark Hearted Woman. The underlying tone is Soul but the stamp of Bubien’s guitar and vocals make this darker number explore misery.

The opening of Second Hand Man makes you think another soulful track, but no we have some funky beats added to this up-tempo number full of horns and widens your horizons.

Blues comes in many colours and forms, the whole album dips into the blues of many shades. Memphis Murder Blues goes deep into Texas. We can boogie the night away, tap our feet as the blues deepen and we sit back a listen with delight as he bends the genre with honkie tonk and a relentlessly driving rhythm. The penultimate Coming Clean is a mix of sultry, emotional vocals and keys from Joe Munroe once again adding a royal blue texture. The album never grinds, perhaps never quite sets you on fire the promise of his full potential is yet to come from Dan a fine singer and songwriter.

The cover is industrial grey, with Dan Bubien’s name in muted beige. He looks lonely, thoughtful sitting on a bench. He should never be lonely but a musician with his band in high demand, way beyond the borders of his native Pennsylvania. Dan has no need to be pensive he has surrounded himself with fine musicians, powerful songs, and the album has a real listenability.