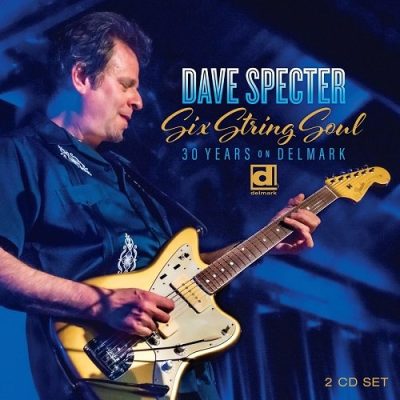 Thirty years in the making , this is a retrospective of the career of Dave Specter on Delmark Records. Dave appeared on the Chicago blues scene in 1985. He has appeared across the US and in at least 19 other countries over his career. This compilation begins with music from the Blue Bird Blues album in 1991 and goes to the single “The Ballad of George Floyd” from 2020. In between, we have a wonderful group of songs from the storied career of a fantastic guitar player whose talents rank up there with those on the Mount Rushmore of blues guitar prowess. Few can create the tone and sound on their six stringed instruments that Dave can. He is one of my favorite guitar players and deserves to be recognized for the great contribution of music he has created and added to the genre.

Specter started his own band in 1989. Before that he cut his teeth with many a great bluesman including Son Seals, Steve Freund, Hubert Sumlin, Sam Lay and The Legendary Blues Band. He has also performed and recorded with pretty much anyone who matters in Chicago blues over the last 30 years. The list is a veritable Who’s Who of the blues world. He’s played for the Mayor of Chicago, the Governor of Illinois and for the President of the United States. Few can match that accomplishment.

His guitar graces over 50 albums, including 12 of his own on Delmark Records. A 2018 inductee into the Chicago Blues Hall of Fame, Dave is also part owner of the fantastic music venue SPACE in Evanston and hosts the podcast Blues from The Inside Out.

His 1991 album Blue Bird Blues also features Barkin’ Bill Smith on vocals and includes Ronnie Earl helping out on guitar. The first three tracks on the album come from that album and feature many greats including Ken Saydak and Bob Stroger; Specter’s guitar is sublime as we get to hear him featured for the first time on his own album.

In 1992, Fortune Tellin’ Man with Jesse Fortune and featuring Dave Specter and the Bluebirds got released. We get to listen to two tracks from that album with Fortune fronting the band as Dave provides superb guitar work. Then Blueplicity from 1994 features Dave and the Bluebirds again and we get to hear the first recorded collaboration with the wonderful Tad Robinson on harp and vocals. One cut (“Ridin’ High”) is featured here.

1995 gave us Live In Europe with the same lineup as the last album. Two tracks are included in this set and once again the listener is treated to one of my favorite collaborative duos in the blues world: Dave Specter and Tad Robinson. The album Wild Cards was also released in 1995 with Al Miller, Dave, Willie Kent and Tad. His long time and current partner on bass Harlan Terson is on this album and is featured on the second track of the two included from that album.

The next year saw the release of Left Turn on Blue, featuring Lynwood Slim and Jack McDuff with Specter. The great Barrelhouse Chuck appears on the first of the two cuts here, too. The album West Side Baby from the next year gives us his take on “St. Louis Blues” with Floyd McDaniel on vocals and guitar and Mike McCurdy and Mark Fornek from the Bluebirds as the backline. Kiss of Sweet Blues from 1998 includes Lurrie Bell, Terson, and also Mike Schlick on drums. That song concludes the first CD. What a great set of tunes so far!

The second disc opens with “Blues On My Mind” from Blues Spoken Here. Also from 1998, we get to hear Dave, Harlan, and Mike with Lenny Lynn fronting the band. Then 2000’s Speculatin’ offers “Texas Top” as it’s entry on this album. Rob Waters plays organ and Ken Saydak is on piano as the lineup from the last album sans a front man appears here; this is a super instrumental cut.

Is What It Is is represented next. The 2005 album features Freund, Waters and Terson with Marty Binder on drums with Dave on another fine instrumental piece entitled “Riverside Ride.” Then we get 2008’s Live In Chicago gives us two more cuts and we get to hear Jimmy Johnson and Sharon Lewis sing while Brother John Kattke gets to add his organ and piano.

Kattke and the superb Otis Clay join Dave for Message in Blue. This 20014 album is marvelous and we are graced with four tracks from it; Otis Clay is featured on vocals on the first two and fourth track while Brother John is on the third cut. In 2019, Specter released Blues from The Inside Out with Jorma Kaukonen and Brother John. Dave fronts the band for the first of four cuts (the title track), his first foray in fronting his band and he does a great job. Kattke handles the next track. The third is the instrumental “Sanctifunkious” and the Kattke handles vocals on the fourth song with Jorma also playing guitar.

The final track is from 2020, “The Ballad Of George Floyd,” where Specter and Billy Branch both sing on this song which is about the execution of Floyd. Branch also plays harp, Danny Shaffer is on acoustic guitar and Kattke handles the organ.

Dick Shurman offers up the liner notes as he did thirty years prior. It’s hard to believe it’s been thirty years. Six String Soul offers the listener a little bit of everything Dave has done on his own with some all star band members joining him. If you are new to Specter, this is a great introduction. His fans will savor the depth and breath of the exemplary work included here.

I most highly recommend this album. I love Dave’s music and he is a fine human being on top of being a fine musician. Add this one to your collection now!
BY STEVE JONES