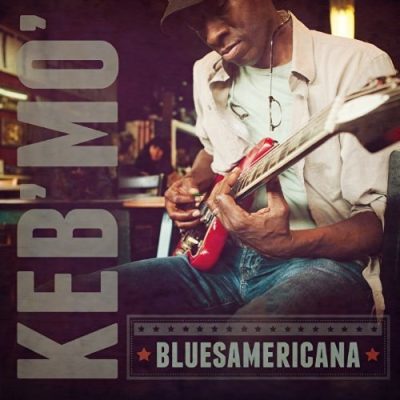 Of all the Blues Albums currently on last weeks (10/12/14) Billboard chart, Keb’ Mo’ Bluesamericana has charted in the top ten longer than any other, an impressive twenty-four weeks. This three-time Grammy-awarded Blues bard continues to extend his legacy as an essential twenty-first century master of this original American art form.

Bluesamericana is Keb Mo’s first release since 2011’s Grammy nominated, The Reflection, which included heavy hitting guests like India. Arie, Vince Gill, David T. Walker, Dave Koz and Marcus Miller. Mo’s first inclination for the current recording was to make a stripped down accoustic album. But his passion for ensemble playing put that notion to rest. Though there is plenty of acoustic playing, it is augmented with electric instruments too.

Part of the magic of this production is that it is not overblown. In spite of having twenty or so contributors the finished result never sounds more than an ensemble of four or five. The basic framework for this expansive project were basic tracks laid at Keb’ Mo’s home studio on the outskirts of Nashville with co-producer Casey Wasner and drummer Keio Stroud. They then seemed to texture in elements of Delta Blues, Pop, Jazz and Doo-Wop.

There are several standout tracks here. The opening number, “The Worst Is Yet To Come,” with it’s intro of drum, bass, and home run banjo makes you wanna get up and Buckdance even when you don’t know how. Understated mandolin, harmonica and background vocals make it sweet.

“I’m Gonna Be Your Man, ” is a solid, well crafted declaration of good lovin’ intentions. The Doo-wop outro really highlights the confidence of the narrator.

The California Feetwarmers add New Oreans cred on “The Old Me Better.”

Bluesamericana has something for everybody. Keb’ Mo’ rolls on.
BY TEE WATTS