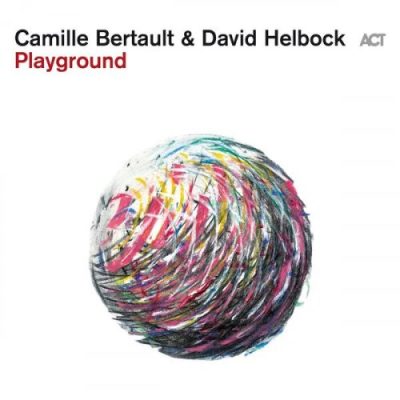 Camille Bertault and David Helbock are two of the most jaw-droppingly talented members of the cohort of European jazz musicians currently in their mid-thirties. Their journeys in improvised music are always adventurous, playful and exciting. She is the new rising star of French vocal jazz. He, Austrian-born, is one of the most fascinating pianists on the scene. Their two personalities might appear to be polar opposites, yet Bertault’s live-wire humour and Helbock’s calm self-assuredness only appear to be different on the surface. When it comes to the musical choices they make, they are emphatically on the same page. Each is astonishingly versatile, with an innate sense of dramaturgy. This voice-piano duo reaches unbelievable levels of inventiveness here on “Playground”.

This dream team had its first appearance at the Ludwigsburg Schlossfestspiele in 2019. The festival has the motto “Song Conversation”, and gives artists carte blanche to choose a partner with whom they have never played before. Helbock nominated Bertault, who in turn asked to work with trumpeter Médéric Collignon –so the three of them played there together for the first time. This was the occasion when Helbock and Bertault realised how well they worked together, and how much they had in common. They both have a grounding in classical music. Bertault also studied the piano until she was 20, before taking up singing; they both love the whole spectrum of music; they are both masters in allowing works from the established canons of different genres to shine in a new light, imprinting their personalities and their own style on them.

It quickly became apparent to both of them that they would pursue their collaboration. However, because of several deferrals due to Corona restrictions, it was not until summer 2021 at the INNtöne Jazz Festival that their live premiere as a duo happened. It was very enthusiastically received, and the set performed at the influential boutique festival in Austria became the he basis for “Playground”: “We exchanged emails about what we were in the mood for, which pieces we liked, just like before Ludwigsburg,” Bertault recalls. “We both love Egberto Gismonti, Hermeto Pascoal, Björk and Thelonious Monk. And we wanted to have a classical piece in it,” Helbock explains.

And so the homage “Para Hermeto”, Gismonti’s “Frevo”, Björk’s “New World”, Monk’s “Ask Me Now” and Alexander Scriabin’s C# minor Etude Op. 2 No. 1 form the basis of the album… fascinating points of departure for this duo which combines so many special qualities, skills, talents and inclinations: Bertault’s ways to deploy her vocal artistry are hers and hers alone. Her voice is a magnificent instrument to carry a melody, sometimes at breakneck speed and with devastating precision, sometimes at pindrop volume. But we also witness Beartault’s passion for writing her own texts; she also studied acting. Helbock’s creativity, exploiting all of the sound possibilities of the grand piano, is completely ‘sui generis’ as well. He doesn’t just dampen the piano strings, he also plays directly on them, he uses the piano case as a percussion instrument, and makes use of electronics. “For the first time, I also worked a lot with loops here,” he adds.

His accompaniment therefore has an almost orchestral scale and depth, a jewel-case for this scintillating and very special voice. “Camille always knows exactly how she wants a piece to look and sound. It is then great fun to finesse it and to reach that point together.” The two worked through that full process on the seven original pieces (four by Helbock, three by Bertault) which they wrote for this album. We hear the whimsical blues of “Lonely Supamen”, the mysterious “Fabelwesen”, the chanson-esque “Aide-moi” and the ethereal-melancholic “Bizarre”.

“Playground” is a kaleidoscope of sounds and emotions which invigorates, excites – and will always surprise. The craft and technique may be breathtaking, but neither musician ever forgets the essential: “It’s not about showing strength or virtuosity, but about expressing the truth of the moment,” says Camille Bertault. And that is what she and David Helbock deliver with each and every track.