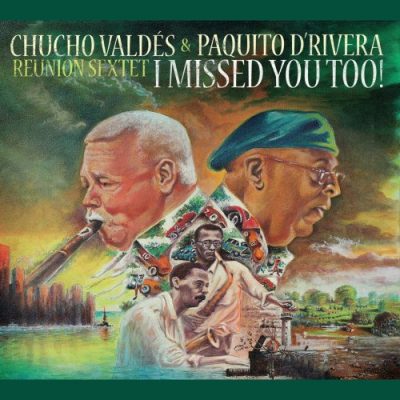 In 1962, two of the most influential and talented instrumentalists that Cuba ever produced were brought together. Saxophonist/clarinetist Paquito D’Rivera was invited to hear pianist Chucho Valdés at a local club in his Marianao neighborhood of South Havana. The two soon became a musical partnership that helped shape jazz in Cuba. Their paths would separate in 1980 when D’Rivera left Cuba.

Sixty years after their initial meeting, the pair has finally reunited to create a monumental new recording. Their I Missed You Too! marks D’Rivera and Valdés’s first recording since they were both members of Cuba’s most influential jazz/fusion ensemble, Irakere.

Both D’Rivera and Valdés are sons of accomplished musicians. They grew up enmeshed in the musical culture and as child prodigies. When they met, their rapport was immediate. Their background in conservatory and popular music scenes allowed them and their music to go far afield, from jazz and son to classical and mambo.

Their first musical explorations would be as members of the Orquesta Cubana de Música Moderna, an eclectic and experimental large ensemble used for stage and screen. Soon thereafter, they formed Quinteto de la Orquesta Cubana, a small group that focused on jazz with Afro-Cuban rhythmic influence. Their longest collaboration was with jazz fusion group Irakere, which began its syncopated journey in 1973.

D’Rivera left Irakere and Cuba in 1980. He eventually settled in New York City where he continued his ascendance in the jazz world, where he remains one of the top woodwind players across any idiom. Valdés remained in Cuba and was the leader of Irakere until 2005. Since then, the pianist has continued as an ensemble leader and solo performer throughout the world.

The past few years have found the old friends reunited for a handful of performances. It was only natural that they take the reunion to the next step and record an album. To do so, the pair recruited the best musicians specializing in the blending of jazz and Afro-Cuban music in their Reunion Sextet. The Sextet features trumpeter/valve trombonist Diego Urcola, drummer Dafnis Prieto, bassist José A. Gola, and percussionist Roberto Junior Vizcaino.

The Cuban legends and their stalwart collaborators met in early January 2022 at Frost School of Music Recording Studio in Miami, Florida to capture the grand event. The program they recorded included originals by both leaders along with pieces by composers of two far flung generations and Latin styles, Hilario Durán and Carlos Gardel.

The recording begins with Valdés’s “Mambo Influenciado;” the electrifying piece features lightning quick passages for D’Rivera’s fleet alto along with brilliant solos from Valdés and Urcola. The pianist’s “Mozart a la Cubana” highlights the leaders’ comfort in blending jazz and blues forms with classical music elements, most notably Wolfgang Amadeus Mozart’s “Eine Kleine Nachtmusik.” D’Rivera’s “I Missed You Too!” swings subtly with the composer’s clarinet and Urcola’s trombone acting as perfect foils. Valdés sets up a bright montuno on Hilario Duran’s tribute to D’Rivera, “Pac-Man,” which builds into a percussive showstopper.

It is truly a wonderful thing to have two giants of Cuban music reunite. Chucho Valdés and Paquito D’Rivera make up for lost time with their Reunion Sextet on the wonderful and diverse I Missed You Too!.