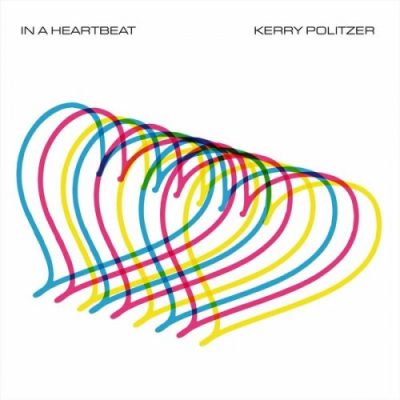 With six previous albums under her belt, Oregon pianist Kerry Politzer is an esteemed mid-career musician with a deep and varied book of original tunes. The jazz scene moves quickly, however, and her new album In a Heartbeat serves as a striking reintroduction to an artist who should be far better known. Only a few years have elapsed since the release of her last project, 2019’s Diagonal, but that was a ravishing tribute to the oft-overlooked Brazilian composer Durval Ferreira. In a Heartbeat is her first album of originals in eight years, and it puts the focus back on her deeply engaging work as a composer and arranger.

A pianist with a bright, singing tone and a supple sense of swing, Politzer leads a quintet featuring a top-flight Portland cast including trumpeter Thomas Barber, Joe Manis on tenor and soprano sax and flute, bassist Garrett Baxter, and drummer George Colligan. Yes, that’s the same George Colligan far better known as a brilliant pianist via his work with jazz legends such as Jack DeJohnette, Buster Williams, and Lenny White and some 30 albums of his own. Colligan, who is Politzer’s husband, has played on her last four releases and is increasingly sought out as a drummer.

Written and recorded largely during the pandemic, In a Heartbeat isn’t a suite, but it incisively explores the roiling emotional turbulence of the past three years. Drawing on Politzer’s own experiences, the music encompasses birth and death and loss and discovery, starting with the disquieting “Bad News.” It’s a probing theme that peers deeply into the darkness even as the tune’s insistently funky feel pushes back against despair, building to a superbly sculpted solo by Barber that cuts through the despondency.

With its quicksilver harmonic movement, “Shaky Ground” offers a different take on unsettled times as the intertwined horns navigate the uncertain footing. One of Politzer’s most winsome tunes, “Spring Day” brims with self-possessed pleasure while feeling like a lost page from the Miles Davis Quintet book circa Seven Steps to Heaven. The album’s centerpiece and title track was commissioned by the 12-piece Portland Jazz Composers Ensemble. In reconfiguring the arrangement for quintet, Politzer retains the lapidary structure with Manis’s deliberate soprano sax beckoning and ultimately coaxing Barber’s trumpet into a sinuous dance.

“A lot of this music was coming from my subconscious,” Politzer says. “Some of it came to me in a dream. I’d wake up and have to write the rest of it down. But those early months of the pandemic always seemed like a dream. I wrote ‘Spring Day’ when going outside was one of the only places you could go and feel like life is almost normal again. This music is definitely about the head space I was in during the pandemic.”

Not surprisingly, anxiety figures prominently in the emotional mix. Unhurried and a little relentless, the tune “3 A.M.” ripples with angst, building to a jarring conclusion that hangs in the air. In a bit of programmatic mercy, Politzer follows up with “Marble Maze,” a delightful, flute-driven piece inspired by her love of Brazilian music. Imagine Debussy buying rounds of caipirinhas for Hermeto Pascoal and John Coltrane. Based on a phrase from Billy Strayhorn’s classic “Raincheck,” Politzer’s joyously swinging “Umbrella Statement” references Portland’s famously damp climate. And the closer, “Goodbye,” is a loving farewell to her aunt that unfurls in a graceful arc, as if the performance is reluctant to end. It’s a fitting conclusion to an album that documents an eloquent and often inspired composer and bandleader responding to the strangest of times.

Born in Washington, DC on December 19, 1971, Kerry Politzer grew up in the capital’s suburbs. There was music on her father’s side—his Hungarian parents played piano and violin—and her maternal grandfather was a high school science teacher who sidelined playing on cruise ships. Starting serious piano studies at eight, she went off to North Carolina School for the Arts for high school, which is where she first experienced jazz. Enchanted by Bill Evans’s rapturous version of “You Must Believe in Spring,” she listened to it “over and over again,” Politzer says. But her school didn’t have a jazz program.

Set to enroll at Boston University, she jumped ship at the last minute and talked her way into New England Conservatory. “I wanted a music degree, not a liberal arts degree with music on the side,” she recalls. A severe bout of tendinitis sidelined her pianistic pursuits for more than a year, but she ended up connecting with NEC faculty Geri Allen and Bevan Manson, “who was instrumental in getting me into jazz piano,” she says. “I started transcribing all this music, so when I was healed of the tendinitis, I started playing jazz,” studying improvisation and composition with NEC’s late jazz guru Charlie Banacos.

After graduating with a degree in jazz piano performance, Politzer made the move to New York City, gaining some recognition as a regular sub touring with DIVA No Man’s Band, which provided opportunities to play with Slide Hampton, Larry Coryell, and Diane Schuur. She had met Hermeto Pascoal at NEC, which helped kindle her love of Brazilian music, a passion she pursued avidly in New York. “I made the jam session scene, developed more original music, and started to sing Brazilian music,” she said. “I got really excited about Brazilian music.”

Politzer first became aware of fellow pianist George Colligan when she was one of six finalists at the 1996 American Pianists Association Jazz Piano competition in Indianapolis. Her host family gave her a cassette of Colligan, who’d stayed with them when he was competing a few years earlier. Duly impressed, she made a point of stopping by to hear him playing duo at Bradley’s with Buster Williams.

“I was on a date that wasn’t going very well, and tried to introduce myself to him,” she says. “Two months later I go to a jam session at Ingrid Jensen’s house and George was there and we became friends. I eventually got to know him better, and as it turns out he grew up in Maryland, too. We started dating in 2000 and married in 2005.”

Politzer released her 2001 debut album, the quartet session Yearning, and followed up with the 2002 trio project Watercolor and 2005’s Labyrinth with saxophonist Andrew Rathbone. The albums all focused on her original tunes, and by the time she released 2010’s Blue in Blue with powerhouse tenor saxophonist Donny McCaslin the web site MagnaTune presciently noted that “listeners will be wondering why they’ve never heard of her before… Politzer has everything you would want in a jazz pianist: chops, invention, tone, emotion, rhythm and originality. She has influences and depth in her improvisation and her composition, but she clearly has her own sound and her own unique thought process.”

She and Colligan relocated to Portland in 2011, and she quickly became an essential part of the scene. On the music faculty of Portland State University and the University of Portland, Politzer plays with Chuck Israels Jazz Orchestra and leads Bossa PDX, a samba-jazz and bossa nova group for which she’s transcribed dozens of classic arrangements from the original recordings. In 2019, she was awarded a Regional Arts and Culture Council Artistic Focus grant to explore the music of Rio composer Durval Ferreira (1935-2007), a project that culminated with the album Diagonal: The Music of Durval Ferreira. In 2020, she received another RACC grant to produce the first edition of Music of Brazilian Piano Masters, which can be accessed at the Music of Brazilian Piano Masters YouTube page.

In pushing back against the pandemic’s isolation and the loss of work for musicians Politzer applied for and received grants from MusicPortland and the RACC for her Driveway Jazz Series project, which provided an outdoor venue for musicians during the summer of 2021. With In a Heartbeat she’s putting the spotlight back on her own work as a writer and bandleader who has delivered another captivating and fully realized set of music. “Composing is one of the things I enjoy the most,” she says. “I tend to be shy and I feel like I need to put myself out there. I need to make a statement.” The message is definitely coming through.