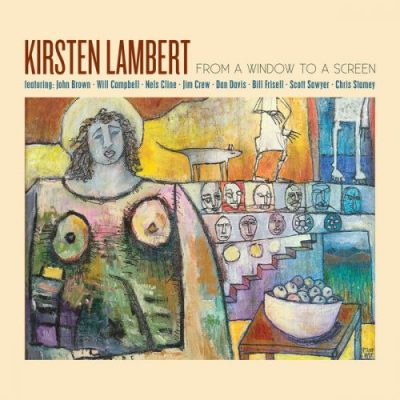 The first two songs on this production are pretty pop-ish, but the vocalist’s voice is magnetic. Her fresh, musical innocence is evident and compelling. Track #3 grabs my attention titled “The Woman Who Walks the Sea.” It’s a beautiful jazz waltz tune with a memorable melody. Kirsten Lambert nails the intervals of this jazzy melody. There is a naturalness to her vocal composure, like someone sitting on the front porch and singing because they love to sing. “Occasional Shivers” is another well-written composition, with Will Campbell adding his saxophone licks as colorful fillers between Kirsten’s melodic lyrics. Most of these songs are ballads, written and produced by Chris Stamey. It becomes a project that seems to be a way to promote the composer’s work, hand in hand with introducing Kirsten Lambert’s voice. It’s an album, more like a well-produced demo, that draws interest to the composer’s songs. “Insomnia” is another ballad. The repertoire makes it a sleepy-time production featuring easy-listening arrangements. “Song for Johnny Cash” is a Country Western ballad that is perfectly sung by Lambert’s smooth jazzy tones. She rejuvenates the song, along with the saxophone of Will Campbell, and they reinvent it into a jazz arrangement. Kirsten Lambert could easily sing Country Western music or pop songs. Her style remains multi-fluid. One of my favorite compositions by Chris Stamey is “I Didn’t Mean to Fall in Love with you.” I just wish these musicians, and the producer, had added more variety to the arranging, perhaps adding a Bossa Nova beat behind one of the ballads or a shuffle. Finally, “There’s Not A Cloud in the Sky” puts the swing groove into place. All in all, these are well-written songs by composer, producer Chris Stamey that are competently showcased by the vocalist, Kirsten Lambert.