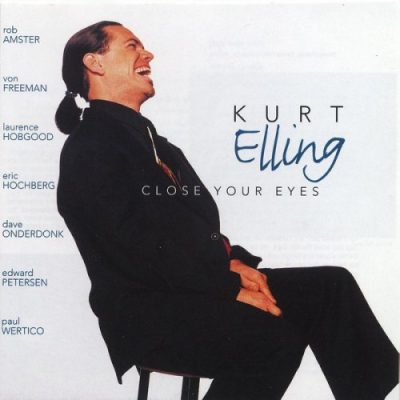 For his debut recording, Chicago vocalist Elling pushes the envelope, challenging listeners and his musicians with beat poetry, ranting, and his Mark Murphy-ish singing. There’s quite a bit of dramatist/actor in Elling, although the romantic in him is also pretty prevalent. Acting much like a tenor saxophonist, Elling can wail and shout, expound on social themes, and scat like a demon. Help from the extraordinary pianist Laurence Hobgood, bassists Eric Hochberg and Rob Amster, and drummer Paul Wertico inspires Elling to even higher plateaus, while tenor saxophone foils Ed Peterson and Von Freeman appear separately on three of the 13 tracks.

Elling writes a ton of lyrics. His take on Wayne Shorter’s “Dolores” is “Dolores Dream,” on which the singer speaks of Chi-Town in terms both favorable (hanging out at the Green Mill jazz club) and not so favorable (“fat frying, spluttering rank Chicago smeltering along, smothered in hot wooly sweat”), with a maniacal swing following his a cappella intro. His ramrod scatting is amazing both on this piece and on an exploratory take of Herbie Hancock’s “Hurricane.” A “So What”-type modality informs “(Hide The) Salome,” with vicious scatting and Freeman’s tenor in complete, frustrated agreement. Elling’s poetic recitation of “Married Blues” and the avant beat style of “Now It Is Time” show his reverence for Rexroth and Rilke, respectively. As far as pure singing goes, “All the Sad Young Men” is beautifully rendered — similar to Murphy, but not as overtly pronounced. “Close Your Eyes” opens with a tender piano intro, flowing into bass/vocal wistfulness and a midtempo romp. Elling extrapolates on the original lyric and scats feverishly on the bridge. He is at his most sexual on the slinky bossa “Never Say Goodbye” and the ballad “Storyteller Experiencing Total Confusion,” with Peterson’s sax shyly filling in cracks of fear and disillusionment. There’s clearly more in store for Elling as he matures, but this is as auspicious a vocal jazz debut as the world has heard.
Review by Michael G. Nastos