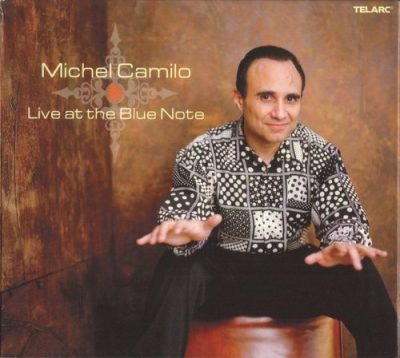 Recorded over four nights of a weeklong engagement at New York’s legendary Blue Note club, this double CD is the first live recording by pianist Michel Camilo and includes a number of new compositions that had not been recorded (or even performed in public) before Camilo and his trio took over the Blue Note stage in March of 2003. This was his first recording with the rhythm section of bassist Charles Flores and drummer Horacio “El Negro” Hernandez, but the trio sounds as if it has been playing together for a decade: Flores and Hernandez both follow Camilo faithfully and supportively, pushing him gently when he needs it and staying out of his way when he doesn’t. Camilo is at his most impressive on the ballads and mid-tempo numbers, on which his lines are delicate, almost lacy, but complex and powerful at the same time — note in particular the lovely “Twilight Glow” and the slightly more impressionistic “Dichotomy.” Few pianists could coax an elegant solo out of “Tequila,” but Camilo does so with apparent ease. On the more up-tempo numbers his soloing tends to be a bit blocky, but his take on the classic “Blue Bossa” features some amazing cross-rhythms in the piano solo, and his own “On the Other Hand” is a brilliant piece of modern jazz piano artistry that incorporated a sly tribute to Thelonious Monk. Some will feel that the album begins wearing a bit by the end of the second disc; others will wish there were a third. Recommended.
Rick Anderson