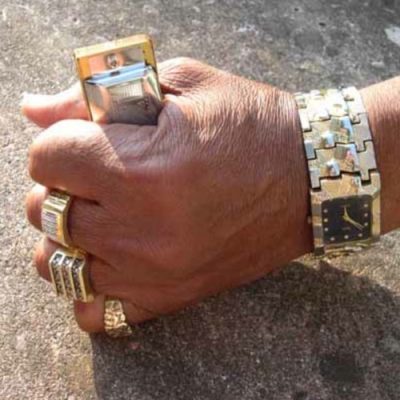 Vocalist/harmonicaplayer Big George Jackson was born November 16, 1949 and in the Twin Cities he is known as the Authentic big man of the blues. He sings with a distinctive bass-rich voice only a six-foot, six inch gentle giant could be blessed with. Add his fat harmonica playing, dead-on phrasing, commanding stage-presence and instant audience rapport and it’s easy to understand why the audience howl when he delivers his music.

The band features two great guitarists: Jeremy Johnson (formely with Mischo) and Phil Schmid (formely with Lynwood Slim) combine tough-as-nails interplay that can alternate between being greasy, swinging and raunchy The band writes its own music, with lyrics written by Big George and they also cover songs by Jimmy Reed, Walter Hornton, Muddy Waters and Big Leon Brooks. In 1998 the band released a CD Beggin Ain’t for Me on Black and Tan Records and in 2001 their second Black and Tan CD. The CD is titled Big Shot. Critics praised Big George’s CD for originality and welcome sense of humor. The Big George Jackson Band is considered to be a great up and coming band and is developing a fast growing following in spite of the incredibly competitive live music scene.

Big George has been working for Minnesgasco, the local gas company in Minneapolis. He has raised six children while pursuing his night-time career as a blues musician. His first european tour took place in November >99 and it was a huge success. Most of the venues had a large crowd and at the bluesfestivals in Luzern (Switzerland) and Unna (Germany) Big George proved to be one of the surprises of the event. During their european tour in April/May 2000 the band performed at he Moulin Blues Festival in Ospel (NL) and at the bluesfestivals of Silkeborg and Odense (DK). The band did two more succesfull european tours in March and November 2001. On the last tour they performed on the Lucerne Blues Festival (CH) and on the Blues Estafette (NL), two of the major blues events in Europe. They also did a live show on national Dutch tv.

In 2002 they performed at the Belgian Rhythm & Blues Festival in Peer (Belgium) and the Colne Bluesfestival in the UK and in 2003 they played at the International Jazzfestival in Montreal (Canada) and Nancy Jazz Pulsations (France). In October 2003 they released their third CD (Southern In My Soul) for Black and Tan Records.