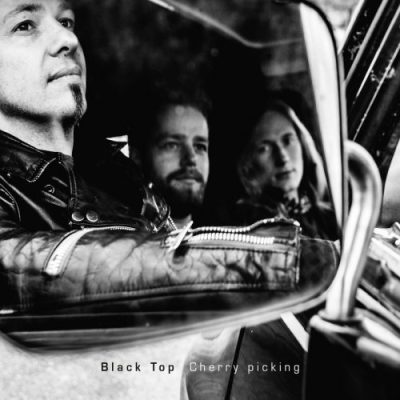 Black Top combines ZZ-Top and AC/DC in one kick ass blues rock trio. With their new album ‘Cherry picking’ with catchy songs, rocking grooves and steaming solo’s the band proves yet again that they are unstoppable blues rock machine.

The third album ‘Cherry picking’ contains fourteen new songs and three songs previously released as the EP ‘Py my Dues’. The songs were written by singer bass player Anne-Maarten ‘Hills’ van Heuvelen, guitar player Elmer Meijers and drummer Rogier Berben in a gritty basement in an old villa near Dresden (GE) and the songs breath those rough surroundings. To create a live feel, the record was recorded without the use of a metronome, which results in recordings that sound the way the band sounds live on stage. Energetic, fresh and rocking.

Most blues rock bands nowadays use the sound of blues from the sixties like the Black Keys do. This Dutch based band has its roots in the blues rock from the seventies and eighties from bands like ACDC and ZZ-Top around their hit album ‘Eliminator’. Black Top even went as far to use those typical synthesizer sounds on the new album ‘Cherry picking’.