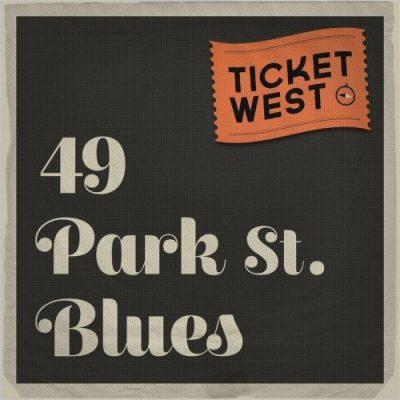 Ticket West is about two brothers that, in their early years, were listening to blues recordings their dad made from the radio. In 1984 (they were 14 and 11 then), Dutch broadcasting company TROS recorded Jimmy Johnson and Billy Boy Arnold playing live at Nick Vollebregt’s jazz Café in Laren. Dad used this big tape deck with large reels that were spinning in the living room.

For dad’s birthday, mom went out to a record store to buy him some blues records. She came home with two records, one by Albert King (King of the blues guitar) and another by Lightnin’ Hopkins. These records fired the interest of the older brother (thank you to whoever advised our late mom to buy these!) who was taking classical guitar lessons at that time. The records were spun over and over again and quickly he could sing all of Alberts solo’s by heart. He knew, there had to be a blues band someday.

The brothers had two friends (also brothers) who played drums and guitar. The older brother took up the bass and convinced his younger brother he could sing. A band was born. But after a few years of practicing and having fun, the band split up. The brothers started separate careers in music that went on for quite some years. However, they always had stuck to that feeling that they, as brothers, would someday reunite. And after more than 30 years, that day came.

In the meantime, the older brother had switched to guitar and the younger to bass. Their interest in blues was now with the West coast style (William Clarke, Rod Piazza, James Harman) and they hooked up with singer and harmonica player Gerrit Ekkelenkamp to be replaced later by his mentee Harp Mitch after he moved to Portugal. Their first record “High Class Horse” which features Harp Mitch on vocals and harmonicas and Nathan James on guitar was released in 2020.

For their second album “Cab driving man”, they went into the studio with a variety of befriended musicians. While the first album was firmly rooted in the West coast style, their second also has a Chicago blues (Magic Sam, Elmore James, Eddy Taylor) touch to it. But still, modern West coast blues (Rick Estrin & The Nightcats, Christ fast, Junior Watson) is not far away. In 2020, the first tracks of this new album were released, full release took place in 2021.

Ticket West is about the brothers doing what they like most while not being bothered by the need to become rich and famous. Just composing, recording, and gigging with friends and doing this to the best of their abilities while keeping their blues alive after all these years.