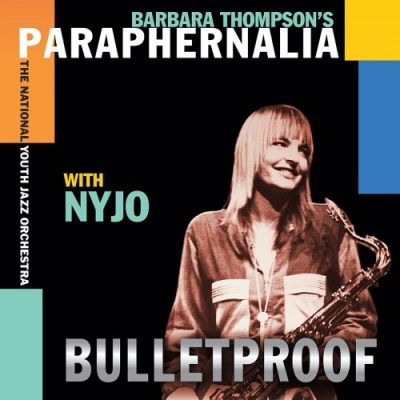 Nearly 5 decades after the formation of the legendary British jazz-rock band Barbara Thompson’s Paraphernalia; the group return in force with ‘Bulletproof’. Featuring 10 original compositions from the virtuoso saxophonist, composer and bandleader Barbara Thompson MBE, and a mixed line-up of classic members and young talent; the album is packed with musical fervour and explosive improvisations.

Due to a continued struggle with Parkinson’s Disease; this is the first Paraphernalia album that does not feature Barbara herself on saxophone. The remaining able members of the band – Pete Lemer on keyboards, Billy Thompson on violin, and Dave ‘Taif’ Ball on bass – join forces with 17 phenomenal players from NYJO, to bring an exuberant twist to the classic tracks under the expert leadership of Mark Armstrong.

Included in the line-up are up-and-coming musicians recently featured in BBC’s Young Jazz Musician of the Year, such as Tom Ridout (finalist) on sax, his sister Alexandra Ridout (winner) on flugelhorn, and Tom Smith (finalist) also on sax. Barbara and Jon’s daughter, Ana Gracey, sings on “In Memory”, a piece adapted from Barbara’s composition “Love Songs in Age” originally commissioned for the BBC Singers, and also an exciting new rendition of Colosseum’s “Safe as Houses”. “Bulletproof”, “Safe As Houses”, “Breathless” and “Little Annie-Ooh” are brand new arrangements which were debuted at a 2019 tribute concert to Jon Hiseman at the Shepherd’s Bush Empire, London.