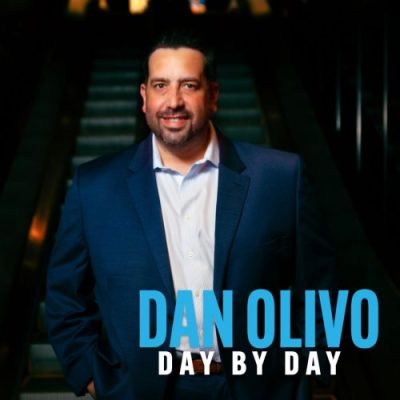 Frank Sinatra could get away with that and much more because he had a great voice, great musicians, great arrangers, and great bandleaders. The entire package. Frank defined a certain kind of 1950s and 1960s Vegas hip, and if you had a problem with it, too bad. He influenced a lot of singers and players, and once he was gone, there were no replacements. There have been a few aspirants, guys like Harry Connick, but at some level, it could be said, “Well, that’s Sinatra, or someone trying to sound like him.” And they were right. But a certain part of Sinatra’s appeal was attitude, and a kind of in-your-face affect mixed with moments of great vulnerability.

There is no way, certainly, that anyone will mix up Dan Olivo with Sinatra, certainly not in terms of the voice. There are places in this recording where Olivo seems as if he may not quite make a note near the top of his range. And, sometimes, unfortunately, his delivery (as in “This Guy’s In Love With You”) is not so much straight as stiff. Which is too bad.

It is too bad because there are other moments in this recording that say Olivo has got something. That is especially true in “Come By Me,” or in “Day By Day,” which are considerably more relaxed and swinging. Ironically, one of his most effective numbers is “All The Way,” which, of course, is pure Sinatra. Olivo does this less by virtue of imitation than by simple sincerity. There is also the attraction of hearing tunes like “More” or “L.O.V.E” that are inextricably bound up with the 1960s, but which one seldom hears any longer. It may be that no one wants to evoke comparisons with Nat King Cole, but if that is not the point of the song—and it is not here—that will not happen. Bobby Bryant’s memorable chorus on the original is replaced by the band instead, and a good group it is. In fact, one of Olivo’s real virtues is that he gives his musicians plenty of space, sometimes for a chorus or so more than is customary. If the band is cooking, that cannot hurt.

So, one way or another, Olivo is a singer in search of a style that suits him. He has great taste in material and an equally good ear for sidemen. He may not exactly be a belter, but he sounds best when he is least restrained or mannered. When he is just singing from the heart, and not when he is trying to be a “singer.” An evening spent listening to Dan Olivo in a club or a roadhouse with a nice bottle of wine and a couple of people you enjoy being around seems a fine idea.
By Richard J Salvucci