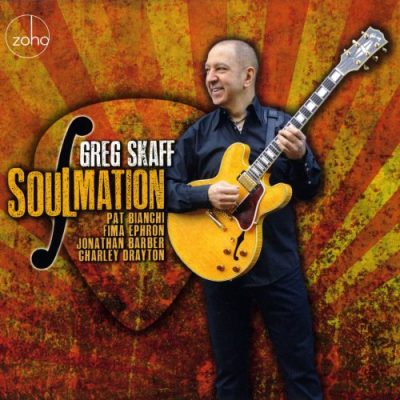 Guitarist Greg Skaff is all about the grease, grit, and grooves on Soulmation. It’s a logical extension of his previous work—guitar-fronted organ group dates like East Harlem Skyline (Zoho Music, 2009) and 116th & Park (Zoho Music, 2012)—but it’s a tad heavier, raunchier, and funkier than anything Skaff threw us on those records. His approach here is equal parts soul jazz, jam band, and unadulterated rock, nodding toward everybody from Grant Green to Lenny Kravitz to Jimi Hendrix.

Skaff wastes no time getting down to business on this one. He kicks things off with a funky gem (“Conjure”) that calls to mind the music that Medeski, Martin & Wood produced with John Scofield. It’s a performance that’s indicative of the attitude surrounding the album, yet the sound of that song doesn’t define the record. No single track could. Skaff is far too cagey to be pigeonholed, altering his direction in slight and not-so-subtle ways from song to song. One number might present like a meeting of Stevie Wonder, Grand Funk Railroad, and Delbert McClinton (“Soulmation”), the next may slam and shred with controlled abandon (“Mother Root”), and the one after that may appear as waltzing jazz poetry riding on a psychedelic fusion flow (Jan Hammer’s “Smoke In The Sun”).

Everything is on the table here, and it’s quite a spread to take in. Skaff and company ably construct Jeff Beck-meets-Living Colour hybrids (“Bottom Feeder”), manufacture slinky-and-dreamy tastes of Ellingtonia (“Fleurette Africaine”), shoot out sizzling swingers (“Porcupine Hat”), and engage in jams that marry roadhouse aesthetics to more advanced harmonic language (“Talisman”). Virtually nothing is left unexplored across these eleven tracks.

If there’s a single idea at the heart of this album, it’s that a musician unbound is like a musician heretofore unheard. Whether discussing the leader, his regular on-record collaborators like organist Pat Bianchi and drummer Charley Drayton, or Skaff album newbies like bassist Fima Ephron and drummer Jonathan Barber, that thought rings true. One can never really know the full weight of an artist’s thoughts and skills until they’re unleashed, so no truer picture of this guitarist (and his friends) may exist. Soulmation is truly a summation of what Greg Skaff is all about.