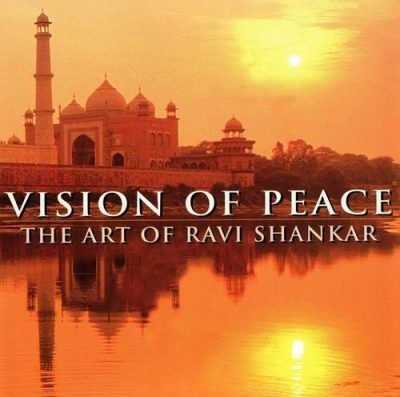 The sublime artistry of the legendary sitar master Ravi Sankar on this two-CD compilation is marred by bungled liner notes. With a title as general as Vision of Peace, one would expect a “mainstream” offering; indeed, the liner notes offer a primer on the Indian raga, with a glossary of terms and instruments. Fine, but you are offered no explanation of the Japanese music on disc one, three pieces without Shankar as performer. Internet sleuthing uncovered that this compilation is drawn from three albums: the entire East Greets East (recorded in 1978 in Japan); the “Raga Jogeshwari” from 1980’s Spirit of India: Ravi Shankar Plays Ragas; and “Homage to Baba Allauddin” from 1981’s Homage to Mahatma Ghandi. The outside notes give no indication this is a compilation album from out of print classics. (The good news is that if you’ve been looking to round out your Shankar collection, you’ve struck gold.) The first five Japanese-inspired tracks on disc one showcase the koto played by Susumu Miyashita (a sublime solo on “Padhaspara”), and the austere and haunting shakuhachi played by Hozan Yamamoto. The two play either solo or in unique arrangements melding Indian sitar and tabla (played throughout by master Alla Rakha, who sizzles in his solo “Kaharwa”). The Japanese collaborations are serene when compared to some of blistering complexities of the ragas, and it’s a lovely experience to allow the “zen silence” to envelop the Indian sounds. Disc two features two ragas, both beginning with the drones of the tanpura on the alap, slow movements so intoxicating they’d register on a blood count. The ragas inevitably pick up steam with head-spinning tabla rhythms (called talas) and virtuosic sitar fingerwork. Ultimately, Vision of Peace is a stunning and enlightening listening experience, marred by thoughtless liner notes.
Carol Wright