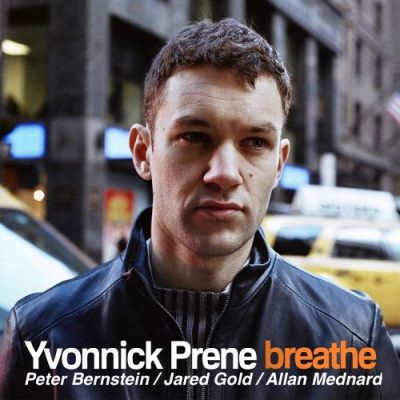 Yvonnick Prene has called New York home since 2007, but jazz fans in and around the Big Apple and beyond can be forgiven if they lacked awareness about his harmonica skills until more recent times. His first album—the inviting Jour de Fête (SteepleChase Records, 2013)—took a while to arrive, so the only way to learn about Prene prior to 2013 was through word of mouth or a chance live encounter. Now, judging from his recent output, it appears that he’s making up for lost time. Two more albums—Wonderful World (Self Produced, 2014) and Merci Toots (Self Produced, 2015)—came in quick succession after his debut, a full gigging calendar in the past few years has kept him in the public eye, and a flurry of writing and publishing activity has produced a good number of jazz harmonica educational publications from this rising star. And now there’s Breathe.

Prene’s fourth album finds him working within an organ-centric setting. It’s a first on record for him, but it sounds as if he’s been dealing with this format forever. Everything from the lively “Blues Comes Down The Seine” to the gently waltzing “As Night Falls” sounds natural as can be. Those two pieces bookend the album, but what’s in between—an easy grooving rendition of pianist Monty Alexander’s “Got To Go,” a charged original in tribute to the Tixier brothers, a joyful calypso number dubbed “The Comedian,” and several other winners—is just as interesting.

Prene’s band here includes two veterans—organist Jared Gold and guitarist Peter Bernstein—and relative newcomer Allan Mednard on drums. For the most part, these four prove to be a simpatico set of players, ably supporting one another and playing off of each other. Mednard is occasionally a tad too heavy-handed for the topic at hand, evident in his crash-filled bossa nova backing on “Armorica,” but that’s just a small caveat. The big picture that Breathe projects—centrist sounds with enough surprises in the structure, soloing, and interplay to hold interest—is a bright one.