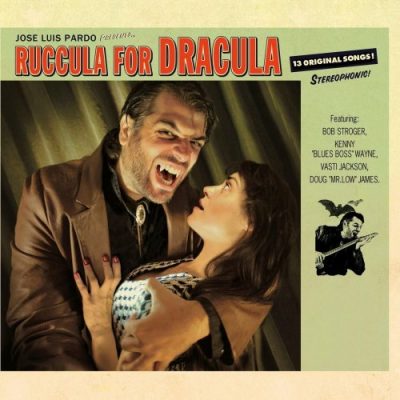 “Ruccula for Dracula” is the nineth disc of the argentine singer, guitarist and composer.
Pardo has been touring worldwide for the last 15 years, with his own project or playing as a sideman for american Blues artists like Michael Burks, Vasti Jackson, Kenny Wayne, Jimmy Burns, Bob Stroger just to mention a few.

Rolling Stone Magazine said ” Pardo reminds us of Robert Cray, Clapton or John Mayer but with a new and disctintive approach”

The virtuous guitarrist found an exquisite balance between the search of fresh sounds and the Blues
Pardo is joined by american legends Kenny Blues Boss Wayne, Vasti Jackson, Bob Stroger and Doug James to make this record even better.

The CD was recorded mainly at Escuela de Blues de Madrid Studios and produced entirely by Jose Luis Pardo. The artist is also the principal of the Madrid Blues School since it´s been founded in 2011

In this new recording, 35 years old Pardo, shows his unique and personal approach to the guitar playing that mixes influences from Mississippi John Hurt to Al Greeny, from Jimmie Vaughan to James Brown and everything in between.