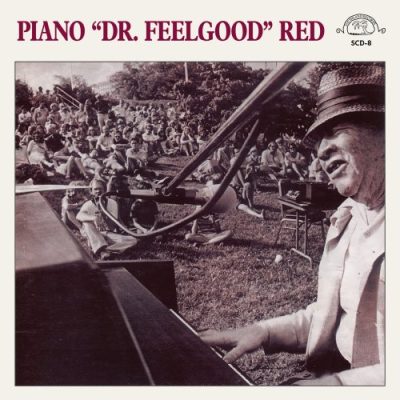 Willie Perryman went by two nicknames during his lengthy career, both of them thoroughly apt. He was known as Piano Red because of his albino skin pigmentation for most of his performing life. But they called him Dr. Feelgood during the ’60s, and that’s precisely what his raucous, barrelhouse-styled vocals and piano were guaranteed to do: cure anyone’s ills and make them feel good. Like his older brother, Rufus Perryman, who performed and recorded as Speckled Red, Willie Perryman showed an aptitude for the 88s early in life. At age 12, he was banging on the ivories, influenced by Fats Waller but largely his own man. He rambled some with blues greats Barbecue Bob, Curley Weaver, and Blind Willie McTell during the 1930s (and recorded with the latter in 1936), but mostly worked as a solo artist.

In 1950, Red’s big break arrived when he signed with RCA Victor. His debut Victor offering, the typically rowdy “Rockin’ with Red,” was a huge R&B hit, peaking at number five on Billboard’s charts. It later surfaced under a variety of guises: Little Richard revived it as “She Knows How to Rock” in 1957 for Specialty, Jerry Lee Lewis aced it for Sun (unissued at the time), and pint-sized hillbilly dynamo Little Jimmy Dickens beat ’em both to the punch for Columbia. “Red’s Boogie,” another pounding rocker from the pianist’s first RCA date, also proved a huge smash, as did the rag-tinged “Right String But the Wrong Yo-Yo” (later covered masterfully by Carl Perkins at Sun), “Just Right Bounce,” and “Laying the Boogie” in 1951. Red became an Atlanta mainstay in the clubs and over the radio, recording prolifically for RCA through 1958 both there and in New York. There weren’t any more hits, but that didn’t stop the firm from producing a live LP by the pianist in 1956 at Atlanta’s Magnolia Ballroom that throbbed with molten energy. Chet Atkins produced Red’s final RCA date in Nashville in 1958, using Red’s touring band for backup.

A 1959 single for Checker called “Get Up Mare” and eight tracks for the tiny Jax label preceded the rise of Red’s new guise, Dr. Feelgood & the Interns, who debuted on Columbia’s OKeh subsidiary in 1961 with a self-named rocker, “Dr. Feelgood,” that propelled the aging piano pounder into the pop charts for the first time. Its flip side, “Mister Moonlight” (penned and ostensibly sung by bandmember Roy Lee Johnson), found its way into the repertoire of the Beatles. A subsequent remake of “Right String But the Wrong Yo-Yo” also hit for the good doctor in 1962. The Doc remained with OKeh through 1966, recording with veteran Nashville saxophonist Boots Randolph in his band on five occasions. Red remained ensconced at Muhlenbrink’s Saloon in Atlanta from 1969 through 1979, sandwiching in extensive European tours along the way. He was diagnosed with cancer in 1984 and died the following year.