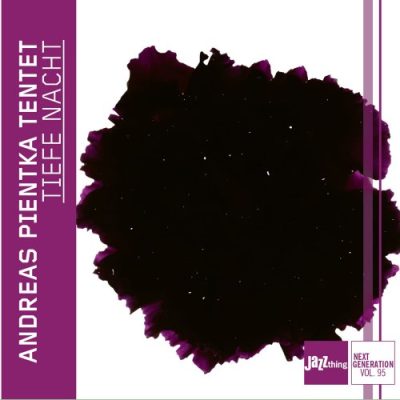 The Leipzig bassist Andreas Pientka sets massive, monumental music in scene with his tentet on “Tiefe Nacht” (trans.: Deep Night). Seven brass players – two trumpets, a trombone, a tuba and three saxophones – as well as a rhythm group composed of Pientka himself as well as the pianist Niklas Roever and the drummer Alex Parzhuber bring the music to life, and the flutist Camila Moukarzel-Ortega also intervenes occasionally in the action. Pientka actually composed this music for orchestra, but the Corona pandemic thwarted his goal and so he opted for this brass-heavy and much more jazz-inspired instrumentation. “I had the feeling that brass players can more easily switch between classical and jazz and, above all, improvise,” Pientka said, who has ample experience with wind instrument movements from his time with the JugendJazzOrchester of North Rhine-Westphalia and the BundesJazzOrchester.

Pientka was inspired by the composition process of Goethe’s “Faust”, and the elementary questions of a place in the world also occupy the bassist’s mind. “I was always interested in many different things, but always kept dealing with the core question of my musical place in this regard,” Pientka explained. “That’s what drove me. I am driven by a certain restlessness and never had the feeling of having found my place. This search never stops and leads you to try out new things and develop further.”

Andreas Pientka was born in Datteln in the northern Ruhr area in 1993, a city that is considered the largest canal junction in Europe. As a teenager, he was interested in rock music, but his interest in jazz was aroused when he joined a big band in a music school. “When I heard ‘Sunday at the Village Vanguard’ by Bill Evans, I noticed how virtuoso Scott La Faro played and how present the bass can be,” the bassist recalled. “Paul Chambers was also a big influence. and I switched to the double bass.”

Pientka began his studies at the Folkwang University of the Arts in Essen; his teachers included John Goldsby, Dieter Manderscheid and Robert Landfermann. He experimented with many genres parallel to his studies. He became a member of the BundesJazzOrchester, had his own trio and played in bands that were in the top 40 of the charts. But classical music was also constantly in his mind, and he finally took classical double bass lessons from Gisèle Blondeau from the WDR Radio Orchestra starting in 2019. In addition to his jazz studies, he also began a classical double bass course, which took him to Leipzig. All of this can be heard in the dense, gripping music of “Tiefe Nacht”, which again and again takes the time for solo improvisations and reduced interludes, in which the bass takes the lead or piano and drums set important accents “Piano and percussion provide a kind of basic framework and act rather supportively,” Pientka stated. “Both are very, very important to make dynamics clear and to contribute this special jazz vibe.”

“Tiefe Nacht” tries not only to synthesize jazz and classical music, but also tradition and modernity, because Pientka is a sound inventor who wants to get to the bottom of things. “I found this search for the origin particularly interesting,” the bassist said. “That’s why I can identify with ‘Faust’, who doesn’t know where his place is in the world. ”With the musical world manifesting itself on “Tiefe Nacht”, Pientka has at least once found his place as a daring and sometimes audacious composer and musician. Or to put it in the Goethe quote that gave the name to Pientka’s three-part suite: “The deed is everything, glory is nothing”.