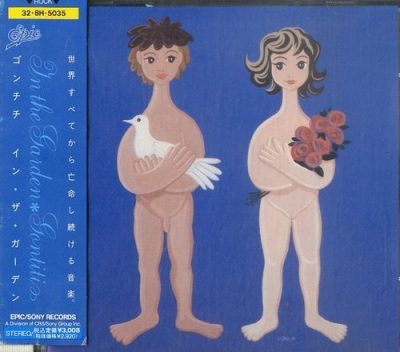 The Japanese instrumental duo Gontiti fuse smooth jazz, easy listening and subtle Eastern influences into a lounge music style that has enjoyed lasting popularity at home while also finding an international audience. Their 1988 album In the Garden begins on a high note with “Andersen’s Garden,” in which melodic acoustic guitar figures play over a light bossa nova beat. The sound is something out of time and space — it could have been recorded anywhere, at any time in the last 40 years. Unfortunately, the rest of the album isn’t as distinctive as that and gravitates toward slick, Western-style smooth jazz with synthesizers, drum machines, and burping fretless bass guitars. Gonzalez Mikami and Titi Matsumura’s acoustic guitars dominate “Ferris Wheel” and the harmonics-laden “Acoustic Eel,” but other songs, such as “Bandit in the Midnight” and “Homemade Grief,” mix horns, strings and electric drums into rhythmic smooth jazz confections that would blend seamlessly into the overhead programming of any dentist’s office or supermarket. The playing isn’t flashy, and at its acoustic best occasionally resembles Hawaiian slack-key guitar music. Gontiti’s lost-in-translation song titles are often bizarre — witness, for example, “Perspiration Kingdom” and “Feathers of Steam.” The liner notes are even more so, with an essay about a parrot man and a meditation on the “unknown nationality” of Gontiti. The album was apparently created as background music, as the booklet expresses Gontiti’s hope that people will listen to it “absent-mindedly” without becoming “too involved in the album.” Despite Gontiti’s low expectations of their listeners, the duo crafted an exceptional piece of instrumental music with “Andersen’s Garden,” and the rest of the album is, at the very least, pleasant and unobtrusive.